All aboard the Thaddeus Stevens Express

The Thaddeus Stevens Society will hold a community picnic on Sunday, October 10, at 1 p.m. at the Hamiltonban park, 4020 Bullfrog Road, Fairfield, PA where there are signs detailing Steven's efforts to build a railroad and run an iron furnace. To bring this history to life, Society president Ross Hetrick will give a portrayal of Stevens. Free hot dogs, chips and sodas will be provided and side dishes are welcomed. We ask that participants be vaccinated.

Stevens is generally known for his political career in which he was known as a foremost champion  of freedom and equality. But he was also a strong promoter of commerce and industry and remnants of those efforts can be found around Fairfield and are highlighted at the new community park, which includes a jungle gym shaped like a train.

When Thaddeus Stevens represented Adams county in the Pennsylvania legislature in the 1830s he was able to get the state to foot the bill to build a railroad from Gettysburg to western Maryland to link up with the Baltimore and Ohio Railroad, which had just started operating in 1830. If the railroad had been completed, it might have linked Adams county to the developing Ohio valley and Gettysburg would have seen a booming economy.

Instead, the railroad was relentlessly attacked for its expense and the fact that it took a zigzag course to get over the mountains, prompting critics to call it the "Tapeworm Railroad." The project was abandoned after Stevens lost political power as a result of the 1838 "Buckshot War," a bizarre event in Pennsylvania history where Democrats took over the state legislature by force. It wasn't until 50 years later that the railroad was completed by the Western Maryland Railroad. Massive stone viaducts built in the earlier effort can still be found in the Fairfield area on Mt. Hope Road and Iron Springs Road.

The Maria iron furnace stack, a remnant of another Stevens venture, also still exists along Iron Springs Road though it is obscured by thick vegetation. Stevens and other investors started the iron mill in 1826 and operated it for 11 years before starting the Caledonia iron works near Chambersburg. Because the Maria furnace was along the route of the proposed Tapeworm railroad, Stevens was accused of feathering his own nest. But in actuality, the operation was shut down in 1837, long before the railroad would have been finished under the best of circumstances.

So come to the Hamiltonban community park on October 10 and learn about the history of Stevens and Fairfield and enjoy a hot dog and soda.

Ross Hetrick is president of the Thaddeus Stevens Society, which is dedicated to promoting Stevens's important legacy. More information about the Great Commoner can be found at the society's website: https://www.thaddeusstevenssociety.com/

Posted by Thaddeus Stevens Society at 2:33 AM No comments: 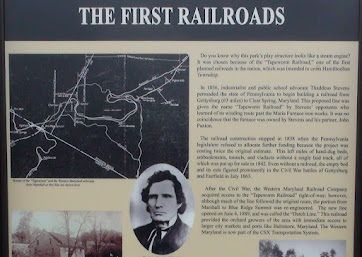 Picture of Thaddeus Stevens on sign at Fairfield, PA park
The Thaddeus Stevens Society will meet on Sunday, October 10, at 1 p.m. at the Hamiltonban Community Park, 4020 Bullfrog Rd., Fairfield, PA. The new park has signs about Stevens's Maria iron furnace and Tapeworm railroad in the Fairfield area.
The Society will hold a community picnic and provide free hot dogs, chips and soft drinks. Additional dishes from attendees are welcomed. We also ask that participants be vaccinated.
Besides a short business meeting, Ross Hetrick will portray Thaddeus Stevens and talk about the Great Commoner's life and involvement with Fairfield history. If you plan to attend, please contact the Society at info@thaddeusstevenssociety.com or call 717-253-0099. 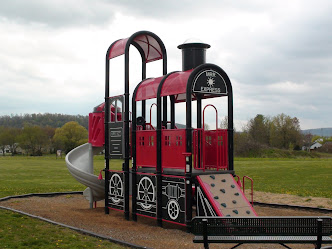 Train jungle gym at Hamiltonban Community Park
Stevens 230th birthday celebration, statue dedication taking shape
The Thaddeus Stevens Society will hold the largest celebration in its 23 year existence on April 1, 2 and 3 when it dedicates a Stevens statue in Gettysburg and fundraises for the restoration of his house in Lancaster, PA.
We will have seminars, banquets and video shows. The festivities will start in Lancaster, PA on April 1, move to Gettysburg on April 2 and conclude on April 3 at Caledonia State Park near Chambersburg, PA.  A tentative schedule for the celebration can be found at: https://www.thaddeusstevenssociety.com/calendar
We are also considering putting together a package deal where participants would travel from city to city by bus and stay in hotels near the events. If you are interested in this or would like to help with the celebration, please contact the Society at info@thaddeusstevenssociety.com or call 717-253-0099.
Stevens statue coming alive 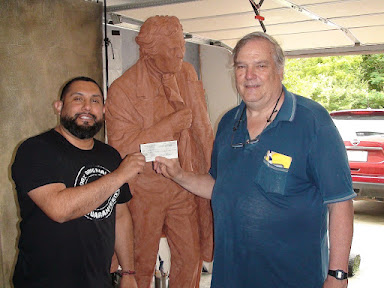 Alex Loza, sculptor of Stevens statue, accepts check from Stevens Society President Ross Hetrick in front of clay model.
The Stevens statue to be put in front of the Adams County courthouse in Gettysburg took another important step in June when the clay model was completed and work began on the final bronze version.
The statue presents a dynamic version of Stevens clutching a copy of the 14th Amendment to the Constitution -- one of Stevens's greatest achievements. Stevens stands on a base in the shape of Pennsylvania with the following places important to his history marked: Philadelphia, Lancaster, York, Gettysburg, Harrisburg and Caledonia. 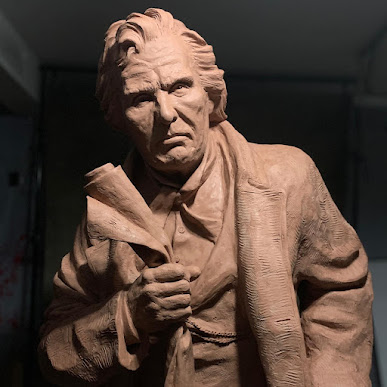 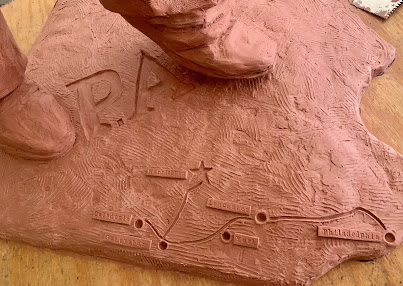 Base of statue with places related to Stevens marked.
Quote about Stevens:
"That which gives Mr. Stevens the great power which he wields in the House -- a power which is almost irresistible -- is his emphatic and earnest denunciation of treason. The country has suffered so much in the past from vacillation that it greatly admires any thing which looks thorough and straightforward. Mr. Stevens's words have a gladiatorial strength which would have done honor to the boldest of Rome's orators. They sway men by their sledge-hammer strokes -- they are words of iron. Whatever be the verdict of posterity in regard to the wisdom of Mr. Stevens's acts and speeches, future generations can not fail to render him the tribute which is always yielded to extraordinary force of character." Harper's Weekly, unsigned, April 7, 1866.
Leave a legacy for Thad
Support Thaddeus Stevens's legacy by leaving a legacy of your own. If you wish to include the Stevens Society in your will, please let us know by contacting Ross hetrick 717-253-0099 or email info@thaddeusstevenssociety.com. Thank you.