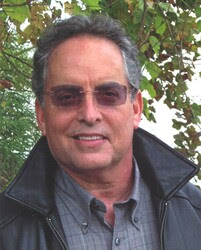 Bruce Levine, the author of the newest Thaddeus Stevens biography, will be featured on an April 2 Zoom meeting at 4 p.m. To attend the meeting, please send a request to info@thaddeusstevenssociety.com and you will receive an invitation closer to the event. A limited number of books with signed bookplates are available at this link:   https://www.aaronsbooks.com/book/9781476793375  After Levine's talk, there will be a Q&A session followed by a brief Society business meeting.

Like many other events, Abolitionists Day is moving on to Zoom on April 10 at 4 p.m. Abolitionist Day has been held since 2017 to celebrate the social movement that helped destroy slavery. This year’s event will be a video review of past years with commentary followed by a group discussion. To get an invitation to the event, email info@thaddeusstevenssociety.com Please designate that you want to be on the Abolitionists Day list.

Plans are being made for two big events in 2022 and we could use your help. The Society will dedicate the Thaddeus Stevens statue in Gettysburg and celebrate Stevens’s 230th birthday on April 1, 2 and 3. Then on the last weekend of July, we hope to inaugurate the first Second Founding Day History Festival in Gettysburg.

The three-day birthday event will feature seminars, banquets, and fireworks in Lancaster and Gettysburg, PA. We hope it will be the biggest and most exciting event in the Society’s 23-year history. The Second Founding History Festival in July will be a block party in the first block of Stevens Street in Gettysburg, PA, where historic and social activism groups will celebrate the ratifications of the 13th, 14th and 15th Amendments to the U.S. Constitution that historians say transformed the American government.

These events are still in the planning phase and we need your help to make them possible. If you are interested, please email info@thaddeusstevenssociety.com or call 717-253-0099 and leave a message. We will get back to you.

What needs to be done

We have done a lot over the last 22 years, but there is so much more to do. Below is a list of endangered Stevens sites and unfinished projects that need our attention. If you would like to get involved in one or more, please contact us at info@thaddeusstevenssociety.com or call 717-253-0099. 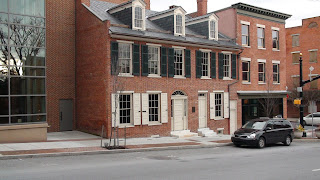 The restoration of Thaddeus Stevens’s house in Lancaster is the most important project in the effort to educate the public about Stevens’s legacy. While the outside looks great, the interior remains a shell waiting for work to start. When it is completed in the fall of 2022, it will be the first and biggest public museum about Thaddeus Stevens’s life. The Society has raised nearly $12,000 to support the effort headed by the Lancaster Historical Society. We hope to raise a lot more in the coming year to support this very important project. 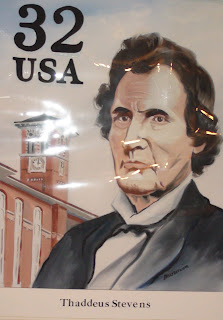 For 20 years the Society, under the leadership of Donald Gallagher, has been campaigning for a commemorative stamp for Thaddeus Stevens. So far it has not been successful. But the effort continues on and Don could use your help in distributing postcards to be sent into the Citizens’ Stamp Advisory Committee. For more information on the campaign, click on this link: https://www.thaddeusstevenssociety.com/stamp 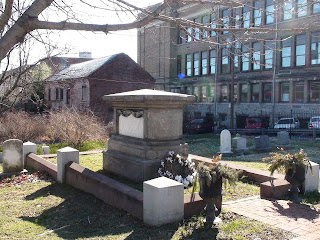 Steven’s grave with its epitaph about equality is perhaps the most inspirational grave in America. The cemetery, which also includes other historic graves,  is overseen by a dedicated group of volunteers who work to protect and maintain it. But much needs to put the cemetery on a solid long-term basis. This includes funding an endowment, clarifying the cemetery’s ownership and establishing a permanent maintenance program. 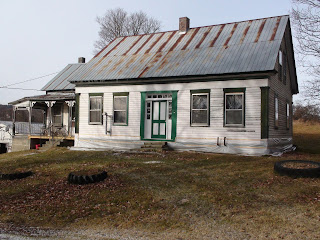 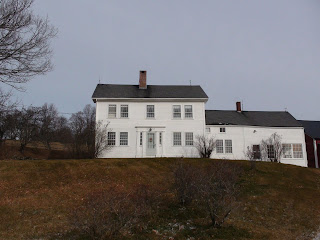 The house where Thaddeus Stevens lived when he was going to Peacham, VT, academy still exists nearly in it’s 19th century condition. Unfortunately, the structure has stood vacant for the last few years after its most recent occupant died. It is crucial that action be taken to prevent this historic house from continuing to decay.

The house that Thaddeus Stevens bought his mother still exists in Peacham, VT and is occupied. While the outside is still the same as it was in Sarah Stevens day, the inside has been remodeled into a modern home.

Both houses need to be protected by historic easements or other means that would prevent those properties from being destroyed and used for other purposes. 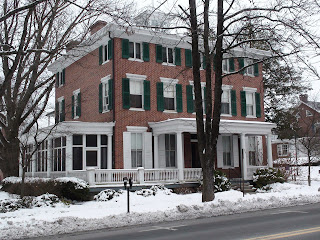 At the corner of Carlisle and Stevens Streets in Gettysburg, PA, is the ancestral home of the McPherson family, one of the most important families in Gettysburg in the 19th century. A member of this family was Edward McPherson, an associate of Thaddeus Stevens and the long-time clerk of the House of Representatives. Edward was instrumental in Stevens’s parliamentary maneuver that barred ex-Confederates from Congress on December 4, 1865.

The house, which is now owned by Gettysburg College, is in pristine condition and would be a perfect place for an exhibit about Thaddeus Stevens, the McPhersons, the Underground Railroad, Abolitionism and the Second Founding of the U.S. The fate of the house is now in limbo. Hopefully, the Society and other historic organizations can encourage the college to have an exhibit that would be unlike any in Gettysburg. 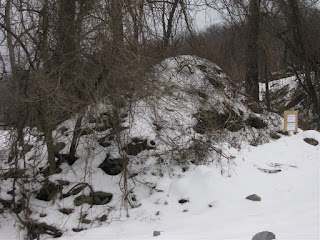 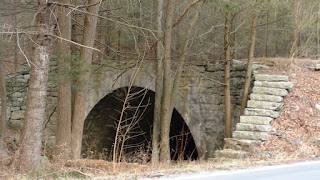 Along Iron Springs Road in Fairfield, PA, are the remains of two endeavors of Thaddeus Stevens -- his Maria Iron works and the so-called Tapeworm Railroad. Next to the railroad that runs alongside the road are the vegetation covered remains of the furnace stack of Stevens’s Maria Furnace that operated from 1826 to 1837. Further down the road is a stone viaduct, which was part of a railroad that Stevens tried to have the state build in the 1830s. The railroad, which  would have connected Gettysburg to western Maryland, was abandoned after Stevens lost political power in 1838.

The furnace stack is badly in need of a clean up and perhaps signage telling visitors what it is. It also needs a historic easement to protect it from future development. The massive viaduct is no danger of being eliminated, but  it could use some signage. Fortunately, the owner of the property in front of the viaduct is willing to work with us.