The Great Commoner, Fall 2022, No. 45, www.thaddeusstevenssociety.com

The Thaddeus Stevens Society will meet on Sunday, Nov. 6, at 1 p.m. at 27 E. Stevens Street in Gettysburg, PA. The meeting will include officer nominations for the next two years, a report on current projects, a view of the Society's collection of Stevens's artifacts and a walking tour of Stevens's sights in Gettysburg.

The meeting will be a potluck lunch, with drinks, spare ribs and potato salad provided. If you plan to attend, please email info@thaddeusstevenssociety.com or call 717-253-0099 and leave your name and whether you will be bringing a side dish. Members and nonmembers are welcomed. People can park in back of 27 E. Stevens Street and on the street. 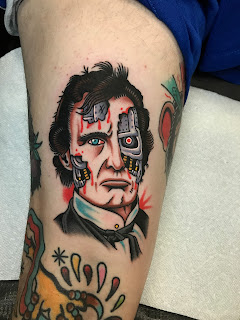 There are many admirers of Thaddeus Stevens, but there is only one that we know of who has has honored Thad with a tattoo on his leg. Chris Beiler, who lives in Akron, PA, has been kind enough to write about the tattoo and how he has used it to teach his children about history.
By Chris Beiler
As an admirer of Thaddeus Stevens and a father of two young children, I often stretch the limits of my kids’ patience and attention spans when I drag them to historical sites, statue dedications, battlefields, and museums. I smile at the idea of my daughter explaining to her first grade teacher that we took a trip to a cemetery just to have her picture taken with the tomb of a man who died nearly a century and a half before she was born. At any rate, my kids have much more exposure to my historical heroes than is probably typical.
While I hope that these experiences will have a strong impact on my children and on their world, I realize that there is a danger of leaving historical figures in the past. I don’t want Thaddeus Stevens to be just some guy who did the right thing a long time ago. In the minds of my kids, I want him to be someone whose character is a dynamic and inspirational force. Someone who has powerful words for issues that are still relevant today. Thad isn’t silent on today’s issues—we know what he had to say about wealth inequality and public education and attacks on voting rights.
So in my attempts to bring The Old Commoner to life for my kids, I tell them stories of a Thaddeus Stevens: Terminator. He’s a powerful superhero who combines Thad’s obsession for justice with robotic superhuman abilities, and an array of tools that will make short work of the forces promoting or allowing injustice. I ask my kids about the issues in the world that are important to them, and I make up stories of them addressing these issues with the help of a cyborg version of my favorite legislator. The stories are over-the-top and far-fetched. I often shoehorn explosions and daring escapes into situations that don’t really need them. To be frank, these stories aren’t particularly helpful in getting the kids to fall asleep. And it’s true that the real Thaddeus Stevens didn’t need lasers or a metallic skeleton, but the end result is my kids begging for bedtime stories that involve them working to make the world a more just place. What dad wouldn’t make that trade?
To pay tribute to the real Thad and to bring the Terminator version to life a little bit, I had the excellent tattoo artist Alex Zampirri tattoo the fictional version onto me. It’s funny and beautiful and a little bizarre, and it’s also started more than a few conversations about the real Thaddeus Stevens. Most importantly, it serves as a reminder that although Thad isn’t here today to fight for what’s right, we are still inspired and challenged by his example. Long live Thaddeus Stevens. 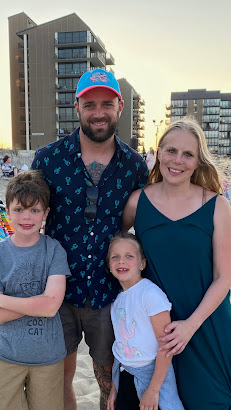 Chris Beiler, Melanie Beiler, and children, Harold and Hannah
How the Thaddeus Stevens's Lancaster house should be restored 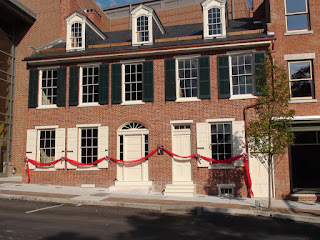 The life of Thaddeus Stevens presents a unique paradox to American history. While he never rose to any higher position than a member of the House of Representatives, Stevens exercised power that was equivalent to that of the President and he had an impact on the United States that continues to this day. This can be attributed to the absence of southern representation in Congress during and after the Civil War, Steven’s unsurpassed  parliamentary abilities and  the sheer force of his personality.

In the new Stevens biography by Bruce Levine, the famous abolitionist Frederick Douglass is quoted as saying this about Stevens: “There was in him the power of conviction, the power of will, the power of knowledge, and the power of conscious ability. . . at last made him more potent  in Congress and in the country than even the president and cabinet combined.” When Stevens died in 1868 his fame rivaled that of Lincoln and major newspapers filled their front pages with his passing. He lay in state in the Capitol Rotunda, and 20,000 attended his funeral in Lancaster – half of them Black citizens.

But in the decades following his death, Stevens’s fame nearly disappeared. This was partly due to his family and admirers doing very little to promote his memory. The Stevens legacy was also the victim of the “Lost Cause” mythology, which glorified the Confederacy and demonized abolitionists like Stevens. But even as the “Lost Cause” started to fade in the 1970s,  Stevens’s importance continued to be obscured as other Civil War and Reconstructions personalities were elevated at historical sites. .

This is why the Thaddeus Stevens Society was created in 1999 to rectify this situation by trying to secure the recognition Stevens  deserves. Though there have been significant achievements in the past 22 years, such as the erection of Stevens statues in Lancaster and Gettysburg, he continues to be neglected at places where he should be recognized.

Therefore, the Stevens Society wants to ensure that the proposed museum in Stevens’s house tells the complete and accurate story of his monumental achievements and is not diminished by other historical matters. It appears that information about Lydia Hamilton Smith and the Underground Railroad will occupy a significant portion of the buildings. And while these subjects were important in Stevens’s life, they should be dealt with in their proper proportion to Steven’s life and great achievements.

Smith was a remarkable woman and was an important part of Stevens’s life, but her accomplishments were not on a scale with Stevens’s. A good comparison of the Stevens-Smith relation is that between President James Buchanan and his niece Harriet Lane, the de-facto first lady during the administration of the bachelor president. She was of immeasurable help to her uncle and worked to have monuments erected to him after his death. Yet, Buchanan and Lane are not treated as equally important at the LancasterHistory’s museum and his Wheatland home.

The Underground Railroad was also an important part of Stevens’s anti-slavery activities. But Stevens was one of thousands of participants in the Underground Railroad and if he had not been involved, it would not have made a significant difference. In contrast, Stevens played a crucial role in the legislative process during and after the Civil War and if he had not been involved, events would have turned out very differently.

With this said, we urge that at least half of the new museum be devoted to Stevens’s legislative career, where he had the most impact on United States history. To do otherwise would give a disproportional view of Stevens’s importance and would continue the marginalization of Stevens’s memory.

The Thaddeus Stevens Society is very excited about the prospect of a museum that tells the complete story of his amazing career and we stand ready to help in any way we can. And this advice is given in the spirit of providing another point of view that can be helpful in creating the best possible museum.

The McPherson house in Gettysburg and the Second Founding 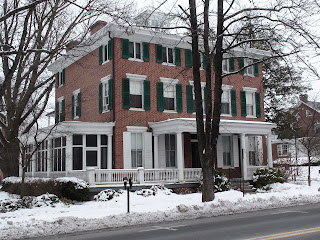 The McPherson house in Gettysburg, PA, at 250 Carlisle Street

The following letter was sent to Gettysburg College President Robert Iuliano on August 9, 2022 about the historic McPherson house, which is owned by the college and has been vacant for several years. As of October 3, 2022, there has been no reply.

Gettysburg College has a special opportunity to create an exhibit to diversity and inclusiveness by using a portion of the McPherson house to celebrate the Second Founding, highlighting the contributions of Edward McPherson, Thaddeus Stevens, Frederick Douglass, Abraham Lincoln, Susan B. Anthony and Elizabeth Cady Stanton.

The McPherson house is uniquely suited for this purpose because it was the home of Edward McPherson who was at the birth of the Second Founding. As clerk of the House of Representatives in 1865, McPherson worked with Thaddeus Stevens in excluding ex-Confederates from Congress on December 4, 1865. Without this particular action, the passage of the 14th and 15th amendments to the Constitution would not have been possible and Reconstruction would not have happened. December 4, 1865 was the birth of the Second Founding and McPherson and Stevens were the figurative midwives.

The Second Founding has become an accepted designation for the period when the 13th, 14th and 15th amendments were adopted and the United States began the movement towards a more diverse and inclusive society. This historic period has been written about by famed historian Eric Foner in his book, The Second Founding, and the National Constitution Center in Philadelphia has been promoting the concept for many years.

An exhibit about the Second Founding at the McPherson house could serve as an excellent orientation tool for college students about the foundations of diversity and inclusion. It would also attract national attention, making Gettysburg as important to the Second Founding as Philadelphia is to the first founding. Also, since the project focuses on important current issues, it should make fundraising easier.

Thank you for your consideration,

Posted by Thaddeus Stevens Society at 8:27 AM